What does the term Australian Aboriginal Culture mean?

The Australian Aboriginal culture is one of the oldest living cultures in the world.

Aborigines developed a culture based on a hunter gather lifestyle.

They see them selves linked to the land on which they live both physically for sustenance and spiritually by the sacred sites of the Dreamtime spirits in their creation stories.

They formed into tribe or language groups that occupied a certain territory. The clan or tribe moved within the boundaries of this territory following the supply of food.

When one area was becoming depleted they moved to another and let the other area regenerate.

The tribe or clan is the larger group and the tribe is divided sections based on kinship this and their moieties determine how these relationships govern responsibilities, behavior obligations and marriage.

The tribe can be further split into two groupings called moieties. Within the moiety groups can be subsections or skin groups. 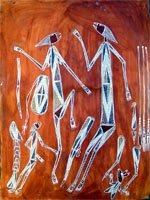 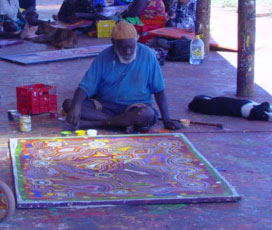 In Australian Aboriginal culture, if a member of the tribe marries out of what is dictated by their skin group it is said to be ‘wrong skin marriage.’

There are also responsibilities to be met in dealing with death and burials.

There are also avoidance relationships such as with your ‘mother in law,’ ‘son in law’ and ‘poison cousins.

Avoidance means you can not be in the same room, car or speak with a person whom you have an avoidance relationship and any contact must be though a third party.The Aboriginals had no written language and their stories were handed down by ceremonies dances and songs.

The kinship system also determines the responsibilities and obligations the tribal members have to pass on these stories.

In which they believe were handed down by creation spirits during the Dreamtime.

The elders of the tribe are the fully initiated and hold the sacred and secret information that is passed on to the young men and women of the tribe as they grow to adult hood and full initiation.

Unfortunately fewer and fewer men go on through this secret process. Without the initiation the sacred and secret information cannot be passed on.The elders are also the holders of the law and these laws are also linked to the land and the Dreamtime and creation stories.

They are also responsible for the interpretation and execution of these laws.

The longer the contact with the European settlers the more these Australian Aboriginal cultural traditions have been eroded.

However, in parts of Australian where the contact has been relatively recent, (around 50 years), the Australian Aboriginal Culture has remained somewhat intact.