Aboriginal Dreamtime is about the stories and how everything in their lives is tied together.Australian Aboriginal people believe in a time of creation when mythical ancestral beings rose from the earth and took human, animal or plant form.At the beginning of time these ancestors existed below the surface of the earth in the form of uncreated supernatural beings. Time began when they awoke and broke through the surface of the earth or emerged from the oceans.It is believed that their actions and wanderings brought into being all the physical features of the landscape. 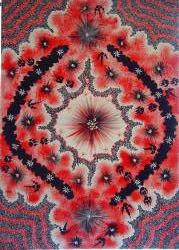 These Spirit ancestors wandered on the earth and each place they emerged, made camp, slept and the tracks on which they travelled have sacred meaning to the Aboriginal people.

The stories of these ancestral beings form the basis of the laws by which the Aboriginal people live and are an integral part of their belief system.

This is referred to as the Dreamtime the time of creation of sacred places, land, people, animals and plants and the laws and pattern of life by which the Aboriginal people live.

It explains their way of life, and how their world came to be. Aboriginal Dream time is the body of knowledge; the stories that are passed from generation to generation by word of mouth, the symbols, dancing, songs and ceremonies.

The Aboriginal Dreamings are the individual or groups set of beliefs carried forward from the Dreamtime.

Each person inherits a specific totem and dreaming stories for which they are the guardians.

Each part of an Aboriginals tribal land is clearly identified as belonging to a dreaming spirit.When the pregnant mother first feels her child move in her womb where ever she is at that moment is the totem the unborn baby is linked to.

A person could have inherited a snake, kangaroo, dingo, emu, ant, totem and the dreaming stories that go with that totem.

Their place in the kinship system of the tribe also influences the other dreamings related to sacred sites hunting etc. that they also inherit. The obligations to pass on their own cultural dreaming story is depicted in Aboriginal Art.

It is a visual expression of these beliefs and a way to preserve their culture, beliefs and history.