William Sandy was born “in the bush” in 1944 in Pitjantjarra country around Ernabella in South Australia.

Winkilini, further to the south, is William's country from his father and grandfathers side of the family.He paints Dingo, Emu, Women and other dreamtime stories for this country in the traditional dot painting style mainly using earth tones.He grew up with the nomadic lifestyle of his tribe.

Walking around his tribal lands until like many other tribal groups his people came in from the desert under pressure from the government.

Eventually the family settled at Ernabella, South Australia where he attended the mission school.From there William came to Papunya in 1973 during a walkabout, where he met and married Violet Nakamarra, sister of Michael Nelson Jagamarra.

They have four children a boy and three girls

Michael Nelson Jagamarra became a noted award winning artist and designer of the forecourt of the new Australian Parliament building in Canberra ACT. 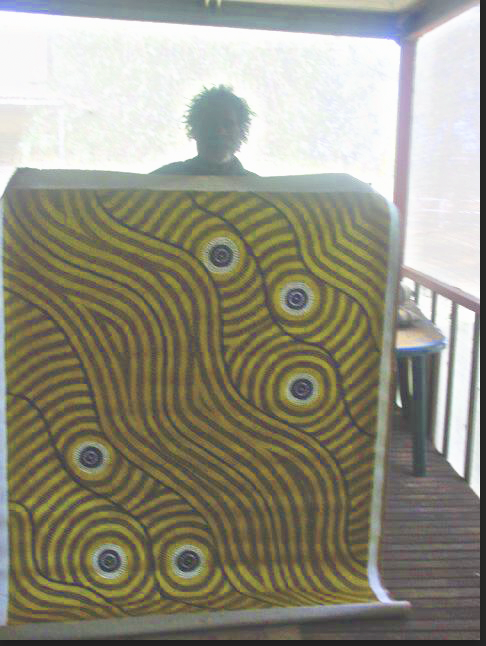 William did his first painting in 1975 influenced by the areas emerging art scene.

Teaching himself to paint while watching the other Papunya artists at work he became strongly influenced by the group.

However, it was not until the early ‘80s that he began painting regularly for Papunya Tula Artists.

Slowed by the departure of Geoffrey Bardon a strong mentor of the group.

This was because it was difficult for some to recognize that Aboriginal people had something valuable to add to society.

His work was included in the “Dreamings” show, which toured in the subsequent show of Papunya Tula Artists at the John Weber Gallery in New York.