Australian Aboriginal Art is a visual depiction of the life, culture and dreamings of Aboriginal people. 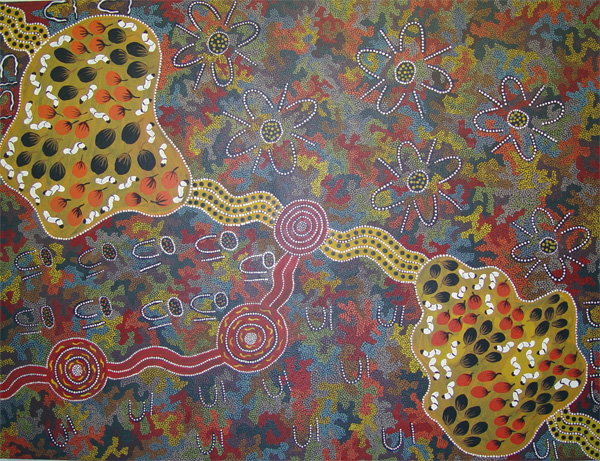 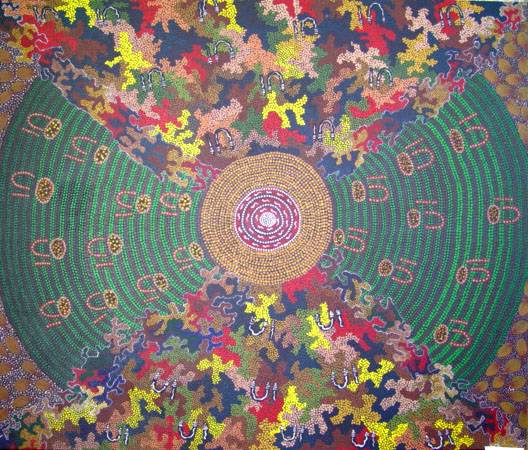 Titled "Coniston Dreaming" by Peter Leo. The painting shows the abundance of bush food available near their meeting place. Peter was an elder and the keeper of the stories of what happened on Coniston Station. Since Australian Aboriginal people do not have a written language their history is passed down through stories, songs and now paintings. "Coniston Dreaming" is about the local Aboriginal people coming together to remember and share their past history. This painting was done in acrylics on Belgian Linen. Size is 93 x 122 cm or 36 x 48 inches.

This painting titled "Coniston Massacre" by Peter Leo of Coniston Station is important beyond words. Peter was an elder and the keeper of the story for his community which meant he was responsible for telling the story of the horrible events which took place at his Homeland and he has done this in this painting because the Australian Aboriginals do not have a written language. The Coniston massacre, which took place in the region around the Coniston cattle station in the then Territory of Central Australia (now the Northern Territory) from 14 August to 18 October 1928, was the last known officially sanctioned massacre of Indigenous Australians and one of the last events of the Australian Frontier Wars. This massacre occurred after Brooks’ body (a local dingo hunter and returned WW1soldier) was found with traditional weapons in a shallow grave. After his death, a reprisal party was formed and led on horseback by Mounted Constable George Murray. The party was made up of both civilians and police killing over 60 men women and children over three months in different local areas. This because a local by the name of Bullfrog who allegedly killed Brooks for supposedly interfering with his wife. The importance of the painting is in the number of rings formed from the center of the painting. They are small and run to the edge of the painting. You can see in the painting the women bringing food and the men meeting along with the dead spirits shown in white on male symbols. What can we do?

This important painting is done in acrylics on Belgian Linen in very fine detail and truly one of a kind. Size is 104 x 121 cm or 41 x 48 inches. 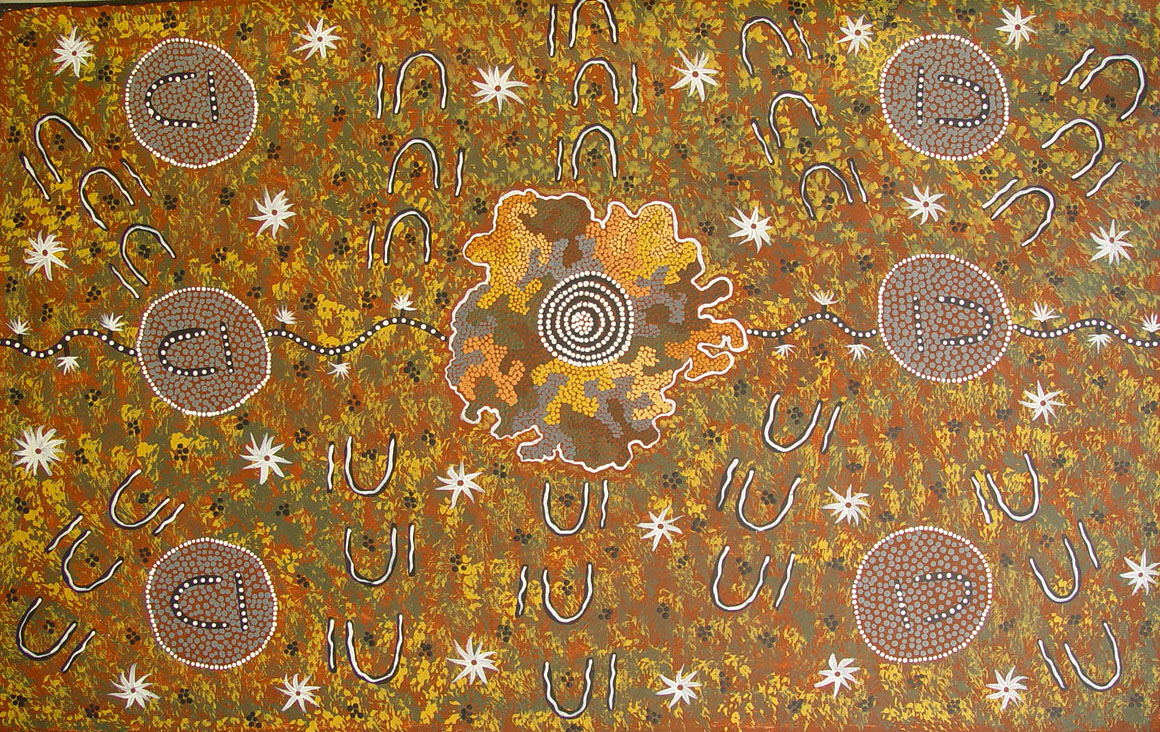 This is a large painting titled "Handing Down the Law" by Willie Gudabi. It is painted in acrylics on linen and is 67 x 180 cm or 26 x 71 inches. Painted in story board form which is unusual for Aboriginal artists.

This is another painting by Peter Leo titled "Men's Death Ceremony" Painted with acrylics on Belgian Linen. Size is 78 x 123 cm or 31 x 48 inches. Another fine painting of the death ceremony of an important male community member. His grave is tiered in layers rising up from the ground like a wedding cake. The morners are gathered around and the dead spirits are all around to welcome him.  Notice that there is no food at this ceremony. 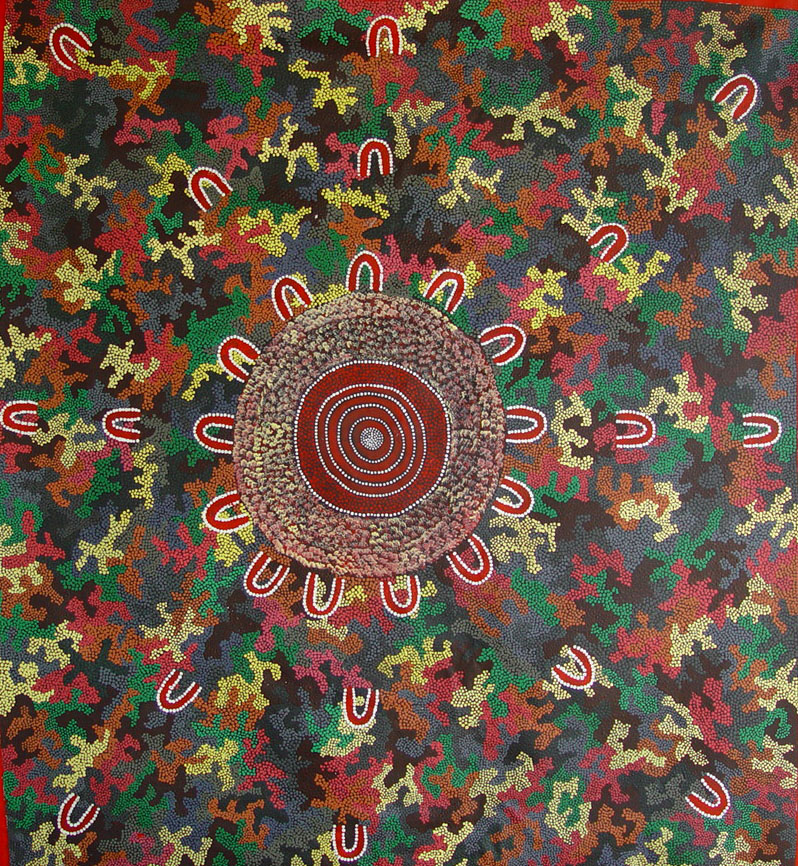 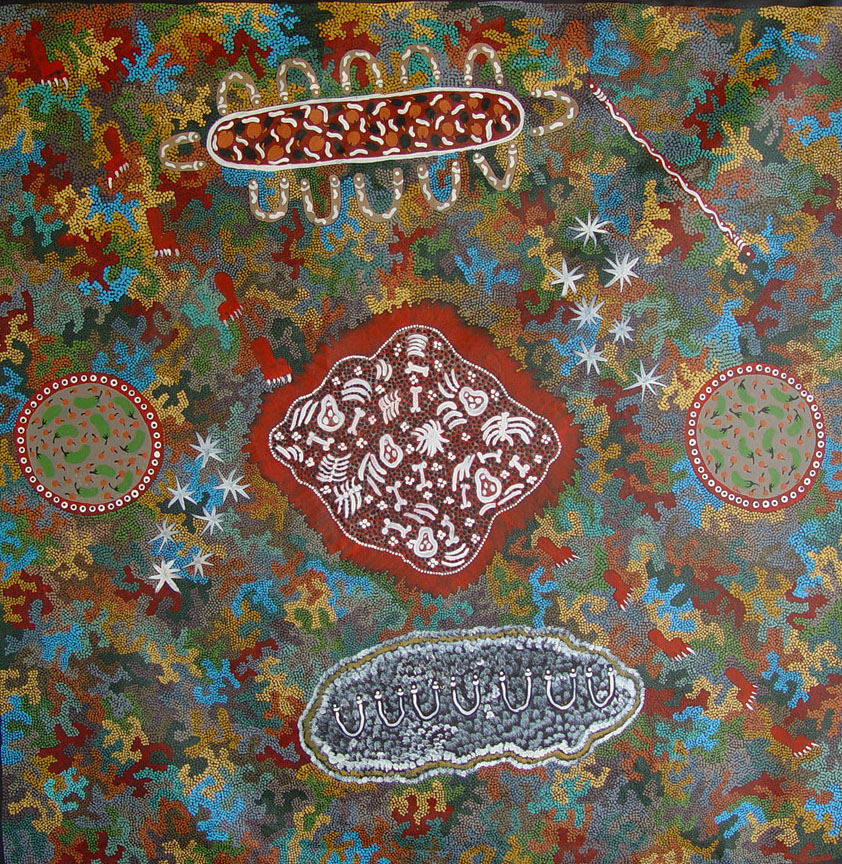 This painting titled "Seven Sisters" by Peter Leo is yet another interpretation of the Seven Sisters story. Painted in acrylics on linen. Size is 120 x 120 cm.or 47 x 47 inches.